Then He said to His disciples, "The harvest is plentiful but the workers are few." - Matthew 9v37

Khaya and Grace Sam are missionaries with Youth with a mission (Ywam) for many years. They moved to East London with their two children, Judah 4 years and Siphokazi, 2 years, in January of 2017.

Loren Cunningham, founder of YWAM, and Chancellor of the University of the Nations, came to speak on his heart for missions. During this time, Khaya and Grace felt led to start YWAM East London's first Harvesting Harvester's Discipleship Training School. On the 8th of April 2018, they ran their first DTS in East London at the first YWAM base!

Their story of crazy radical faith and a deep desire to obey God even when they themselves don't understand, as they stepped out they get to see parts of Him otherwise they would not have seen should they not have taken such a step!! we thank Abba for His faithfulness!!

"Our mission is to cultivate the culture of mission in East London, as well as raising leaders who realize their God given potential. We believe it takes nations to unlock nations and we love the cross-cultural value that YWAM implements into our daily lives. Not only do we want to walk personal journey's of discipleship with the people of South Africa, but our heart is that every nation would come and see the value of what Jesus put in their nation to unlock the nation of God on this Earth!" - Khayalethu Sam. 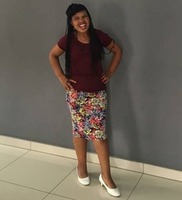 "After graduating I felt led to come back to my hometown and partner with YWAM East London. While I'm here I want to bring Jesus to the youth who have not met Him yet through discipleship and to see them heal"

"I have been in missionary work since 2015, doing a soup kitchen and also busy with kids ministry.

I did my DTS in April 2019 in East London, South Africa. I came back to YWAM East London after my DTS to staff because I felt that God told me that there are a lot of things He wants me to do for Him.

I obey God and I have a willing heart and mind to do exactly what the Lord is telling me to do."

"I felt that God was calling me to staff at the YWAM base in East London. I am passionate about working with youth and interacting with them."

Linky is originally from Aliwal North, South Africa. She completed her DTS in Amsterdam, 2015.

" I came to YWAM East London to serve alongside the other staff because I want to follow the calling of God upon my life.

I truly have a heart for missions and a love for God and people."